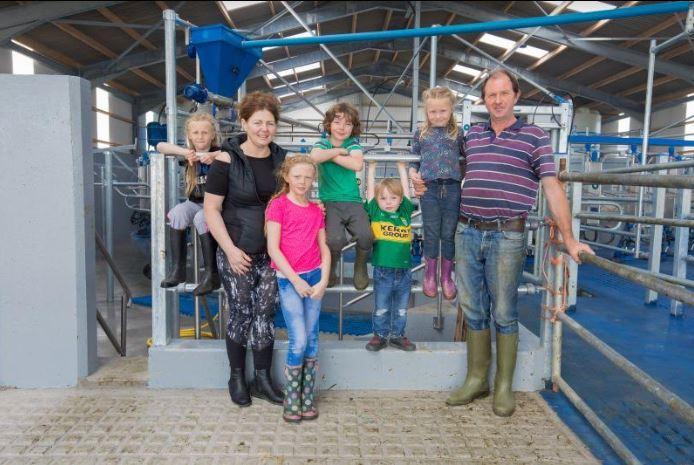 Maurice and Eva Costelloe manage a large dairy farm at Kilgulbin near Ardfert in North Kerry.

Eva works as a paramedic in Kerry university hospital, Tralee, Co Kerry. Maurice milks 300 cows with some assistance from Michael O’Sullivan while Joe Costelloe is responsible for feeding and rearing the calves. Eva and Maurice have five young children-Eva –aged 10, Maurice who is eight, Mia aged seven along with Holly who is six and the youngest is Brendan, a four-year-old. With 300 cows to milk, replacements to be managed and all the other farm work Maurice was under severe time pressure.

In addition the Kilgulbin pedigree Holstein herd is 50/50 autumn and spring calving so there is no winter break for Maurice from the milking as it is done 365 days of the year. Average milk yield is excellent at 9,500 litres pa, with butterfat at 3.70% and protein at 3.30%. The milk is supplied to Lee strand Creamery who have a liquid milk business in Kerry and West Limerick. In fact, Lee Strand is the only creamery in Ireland, where local farmers deliver fresh milk straight to the creamery every morning!

Over the last 15 years the herd has increased from 100 to the current level of 300 cows. In the early days their 10-unit Dairymaster parlour was fine for the job but in more recent times it was taking three and a half hours morning and evening to milk the cows. Maurice says he was stuck to the farm and “I could not go anywhere due to the work load” Eva says “there was very little time for the family so we knew we had to upgrade our milking facilities. Maurice wanted to get out of the parlour in one or one and a half hours. ” So, we decided to make “a financial investment in a new rotary parlour.

The local Bank of Ireland Manager Claire Lynch was very helpful to us in this regard”. Eva highlighted how Maurice was always very progressive and passionate about farming and I knew this was the right decision”. Maurice went to visit different rotary parlours and checked out various brands. However he decided on a Dairymaster Swiftflo Revolver parlour because he was very happy with the finish and fast output of cows. According to Maurice the Dairymaster staff were very good –they were most helpful and could not have been more professional from start to finish. “We installed a 50 unit parlour and it only took the cows four to five days to get used to it. The cows are very content and a lot happier in the new parlour and milking only takes around one hour. It’s a one person operation now and there is no walking as the cows come to you “says one very happy Maurice. “The new parlour has automatic teat spraying, Auto ID to recognize every cow and the automatic gate gives excellent drafting. In addition, the ClusterCleanse rinses the cluster after each cow has been milked and is a great help to prevent the spread of mastitis” says Maurice. “Indeed the cell counts in this herd are excellent and mastitis is not a problem” says Eva.

They also installed a 23,000 litre Swiftcool bulk tank. This is very energy efficient says Maurice. “Milk cooling can account for 40% of a dairy farms energy bill so efficiency is very important” says Eva. “The SwiftCool CoolControl system allows you to communicate directly with your tank wherever you are via SMS messaging for your peace of mind “says Maurice. The continuous monitoring and reporting allows instant access to information on the current status of the tank while two-way SMS communication provides immediate control. The Costelloe family have also cut the dairy farm water heating costs with the SwiftCool Duo system they installed. It reduces water heating costs with the potential to save over €1,000 for any dairy farmer using over 300 litres a day. The SwiftCool Duo allows you to have a hot wash every day and more hot water all year round which further reduces costs. There is also lots of hot water for feeding the calves. The SwiftCool Duo heat recovery system really is environmentally friendly as it recovers up to 6 times more heat than conventional heat recovery systems. As a result of their decision to invest in a hi-tech milking system Eva and Maurice can now enjoy a much better lifestyle.

Maurice himself now has time to go coursing, attend football matches with Kerry or his local Abbeydorney club. He also has time to bring the children along with Eva to play basketball, football and hurling not to mention dancing practice and music lessons. After all he is finished milking and wash-up now every evening by 6.30 pm.


It is interesting in that significant financial benefits from using rotary milking parlours has been shown in Britain by an independent study done by DairyCo now called AHDB. AHDB Dairy is a levy-funded, not-for-profit organisation working on behalf of Britain's dairy farmers. They provide independent, evidence-based information to British dairy farmers on a range of topics including milking equipment. Their factsheet shows findings from the 2012/13 Milkbench+ data analyses revealing how 432 British herds have performed. The comparison was between herringbone, rotary and robotic (AMS) milking parlours. There was a significant range in the labour used per cow between the parlour types. Herds with rotary milking parlours recorded an average of 25 hours per cow per year, while herringbone and AMS herds averaged 35 and 36 hours per cow per year respectively The total cost of milk production in pence per litre (PPL) is show hereunder. As can be seen from the table the average rotary had a much lower cost than the robotics (- 5.4 ppl) so investing in a rotary parlour for bigger herds is the best economic and time management decision any busy dairy farmer could make.