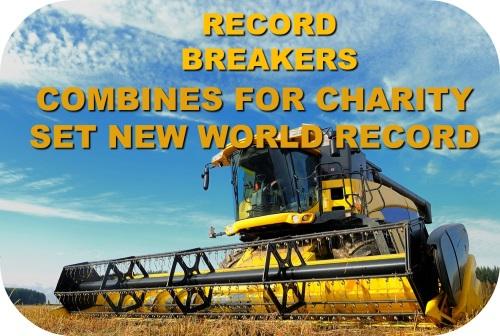 WORLD RECORD by Combines for Charity in less than 7 minutes!

From Combines Harvesters we successfully transformed to Self Propelled Forage Harvesters! On May 6th 2017 in Kiltale Trim Co. Meath The Combines 4 Charity Great Grass Event set a new world record of the number of self propelled working simultaneously in one field.

It saw 106 self-propelled harvesters descend onthe 100ac site. The gates opened at 10:00am to the public, who streamed onto the site over the course of the day to witness first-hand this once-in-a-lifetime spectacle. After no more than seven minutes a crowd of 5500 people witnessed the 100ac of grass that had been lying on the ground now chopped and blown into the trailers – waiting to be tipped in the nearby silage pit.


There were  some rarities of harvesters present, including a Mengele Mammut 7800 and its red sibling – the now-famous ‘Charity Case’ 7400 (Case IH), which was restored for the event.  Also two Hesstons and even a Mercedes MB Trac (coupled to a Pottinger harvester) kept up with the pace. The most impressive ‘classic’ forager had to be a fully-restored New Holland 1895 Crop Cruiser. Of the newer varieties Claas was in the majority; 41 of the machines present bore its livery. Next up was John Deere, followed by New Holland. Although not finalised we can safely say the event raised well over €60,000.