Winners of a Dairymaster bursary - Ploughing 18 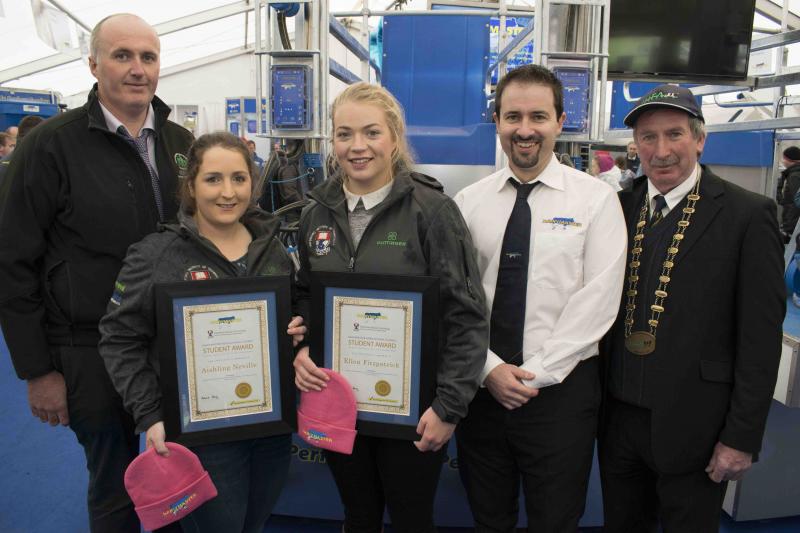 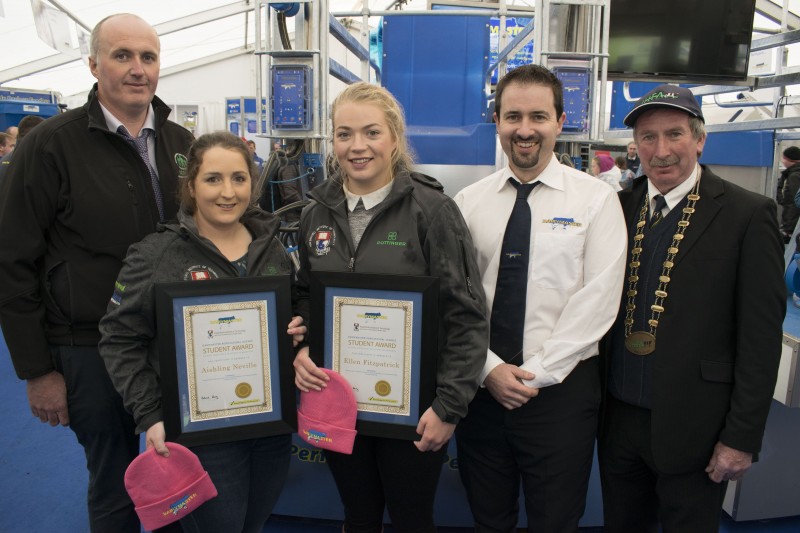 Aisling Neville hails from Ballydaly, a town land just outside Tullamore in County Offaly. She previously studied in the Sacred Heart Secondary School, Tullamore, before receiving enough CAO points in order to pursue her studies in WIT.

Aisling was one of ten 4th year Agricultural Science students that were shortlisted for the Dairymaster Award. This award is given to two students from the group who give the best presentation on their final year project. Aisling was lucky enough to receive the award alongside classmate, Ellen Fitzpatrick.

Aisling’s final year project was about preventative methods used to prevent the harmful disease, Cryptosporidium parvum in dairy calves. The project was carried out over an 8 month period in which she monitored the growth rates of 4 groups of calves. The project used both autumn and spring born calves, 40 calves in total. The study compared two different C. parvum preventative treatments, Halocur and Auranta.

Aisling was inspired to carry out this project as she has a keen interest in dairy farming, with calf rearing being her specialty. On her home farm, Aisling’s family milk 250 cows in a split calving system, of which she’s the chief calf rearer. Aisling was also the head calf rearer on an 800 cow farm in South West Victoria, Australia where she reared 400 calves on her 6 month work placement for 2nd semester of third year.

She is currently working on her family farm alongside her brother and parents as well as working part time on a neighbouring farm milking 200 cows.

Aisling’s main goal is to own her own herd of commercial dairy cows by the time she’s thirty, with the establishment of her own farm business. She wishes to continue to excel in the dairy industry in future years.

Aisling has recently passed her final year exams and is set to graduate in November with a First Class Honours Degree in Agricultural Science.

Ellen Fitzpatrick, a past pupil of St. Mary's Secondary School, New Ross, County Wexford is one of 2 students at Waterford Institute of Technology (WIT) to be awarded a final year project award in the Dairymaster Awards which take place on/took place on the 24th May 2018 date.

Ellen lives in New Ross, Co. Wexford with her family.

Ellen explains that following the 4th year project presentations, 9 students were shortlisted to present their projects to Dairymaster at a later date. On the 24th of May, 2 representatives of Dairymaster travelled to WIT to watch the 9 presentations and they chose 2 winners.

“My project was called "An evaluation of grass quality for milk, beef and sheep production using efficient and environmentally sustainable chemical fertiliser". This involved 3 different grass varieties and 6 different fertiliser treatments in which the Greenhouse gases carbon dioxide, methane and nitrous oxide emissions were measured along with a number of nutritive parameters such as DM and crude protein of theses grass samples. This measured the sustainability of the fertiliser treatments while also taking the nutritive value of grass into account,” she says.

“It was an absolute honour to win the Dairymaster award, especially with the extremely high standard of final year projects evident among the final year students in WIT this year. I also thought it was fantastic that 2 women won the award this year, I feel this a testimony to the equal opportunities given to women in agriculture here at WIT.”

Ellen plans to continue her education and is starting a PhD in the Teagasc Centre in Moorepart this October in grassland.