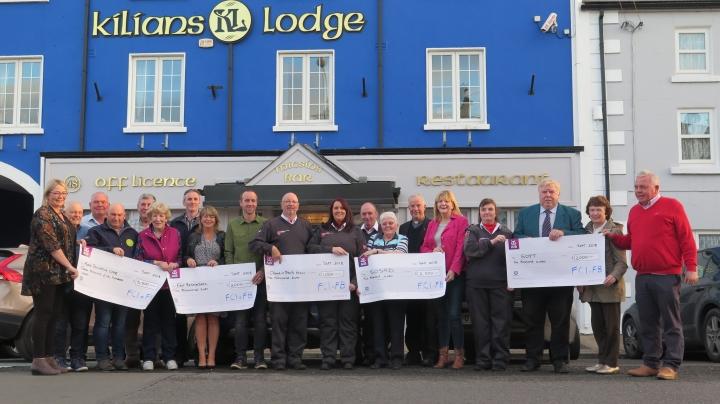 
Host contractors and brothers, Patrick, Peter and Michael Farrelly staged the annual FCI Charity Event, which this year included the Mickey Farrelly Tractor Run, in memory of their late father, who began a farm contractor business from his farm more than 40 years ago. The event was supported by a large number of food suppliers who made generous donations to ensure that the large attendance enjoyed a great day out with top quality food and entertainment.


The proceeds from the FCI Charity BBQ, Auction and Tractor Run raised €12,000 for a number of charities that the event was supporting, including Meath Palliative Care (€3,500), Save our Sons & Daughters (SOSAD) (€2,000), Support Organisation for Trisomy (SOFT) (€2,000), Order of Malta, Kells (€1,000), and Swords (€1,500), and Carnaross Community First Responders (€2,000). The cheques were presented at a celebratory function held at Killian’s Lodge Hotel, Mullagh, Co Meath, at the weekend.


Peter Farrelly, General Secretary, Association of Farm Contractors in Ireland (FCI), who took on the responsibility to stage the event, in association with his brothers Patrick and Michael, said, “We are indebted to all of the generous food suppliers who supported us in staging the 2018 FCI Charity BBQ. We also thank the contributions from huge attendance which have provided us with the opportunity to support so many worthwhile charities. To date, the FCI Annual Charity BBQ and Auctions have raised over €115,000 for many local and national charities,” he added.


Caption (FCI BBQ 2018 Presentations Overall Group Pic): Pictured at the presentation of cheques from the proceeds of the Association of Farm Contractors in Ireland (FCI), Annual Charity BBQ & Auction which was held on Sunday, July 15, 2018 at Farrelly’s Yard, Kieran, Carnaross, Kells, Co. Meath were five of the supporting members from the six recipient charities from the Meath region, with their cheques which amounted to €12,000, which was raised during the event.