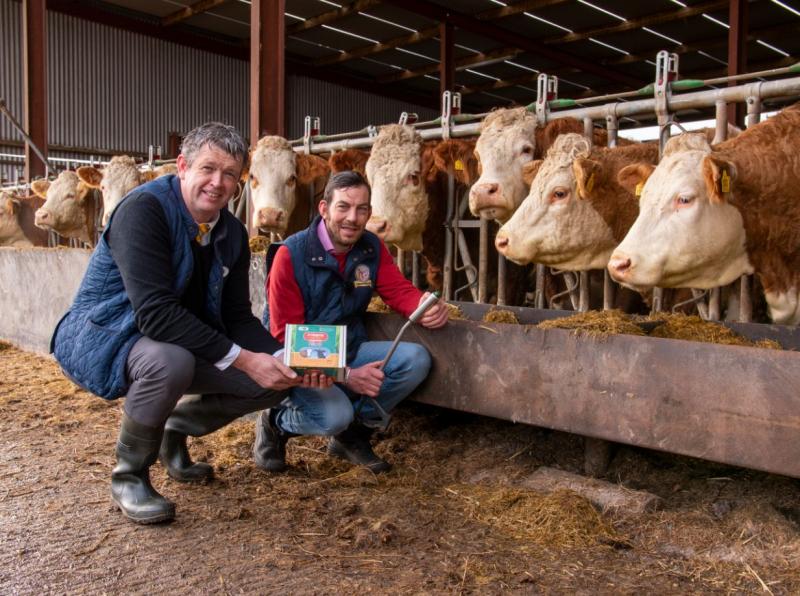 Garrett Behan and his wife Lyndsey own the Clonagh Herd of pedigree Simmentals in Co. Laois.


This herd has won every award going at major shows for eight out of the last ten years.


They recently received the Simmental Miss World award at Farmfair International in Canada for their cow Clonagh Darling Eyes.


The winner is chosen by judges worldwide, as well as a public vote. 105 national champion Simmental males and females from 60 countries were entered.


It was the first time a European cow won this prestigious prize. Clonagh Darling Eyes was


the Overall Simmental of the Year in 2017 and 2018 at the National Livestock Show in Tullamore.


is the only animal to win the overall title three times at the National Livestock Show.


His two daughters have also won it a combined four times.


According to Garrett “In 1989 we went to the Royal Dublin Show and my mother, purchased Clough Sandra, a prize winner there.

We had been dairy farmers up to 2001 and had sucklers before that, but we decided to focus on breeding.”

Manor Park Hansome was the latest purchase and is the current senior herd sire.

“I went to Stirling last October and when I saw him, the youngest bull in the sale, he was doing 1.93kgs/day.

He is just touching 1,100kgs now at 17 months. Hansome was this year’s Overall Male of the Year at the National Livestock Show.

Garrett says that “The 30th anniversary sale was resounding success for the team.

We had a 100% clearance of our 15 females at an average price of €5,233. These stock won eight of the eleven national breed championships.

Animax Bolus the Choice of Champions

Garrett says “We first used Animax’s Allsure Cattle bolus when we were doing embryo transfers. Our cattle are now bolused every year, six weeks before calving.


This is vital for the health and wellbeing of our cattle as they can go through stressful periods during the year. “


“In our experience, we find when cattle have exceptionally above average weight gains, they require extra mineral supplements, and this is where we see Allsure Cattle as the ideal solution.


Also, when flushing and implanting embryos it is a great boost for fertility and pregnancy rates.”


Animax are best known for their Allsure range of unique leaching boluses which deliver known and optimum level of the key trace elements for 180 days.

They are essential for supplementation in low trace element diets in livestock.

According to Flor Ryan, from Animax “Valuable cattle need to have the correct balance and amount of nutrients to fend off disease and infection whilst supporting growth and performance.


These boluses are given orally using a suitable applicator.


“Copper, selenium, cobalt and iodine are the main trace elements required, but copper may also be de?cient on some farms.


Copper may be present in adequate amounts, but a deficiency may arise due to antagonists, there can be also be antagonists or compounds that interact with the other three trace elements.”,


She went onto say that “Trace element availability is in?uenced by the season, type of soil and forage, and preservation of forage.