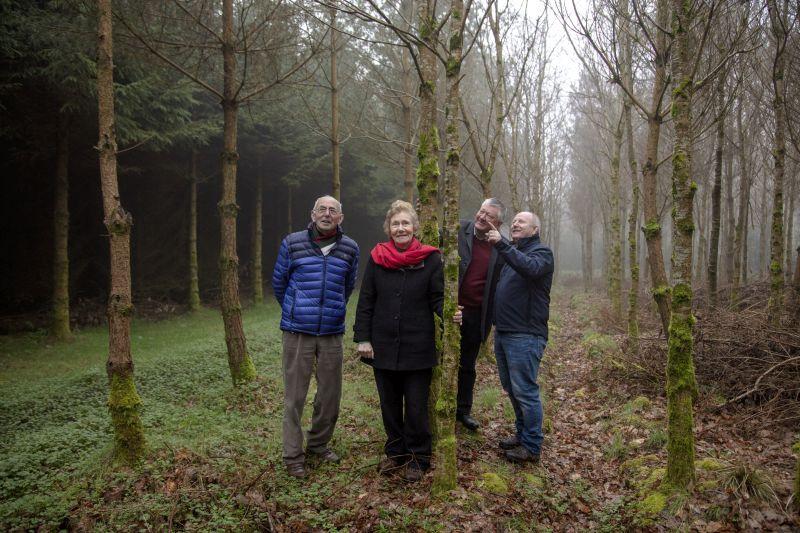 Ann and Paddy O’Reilly are the proud owners of two award winning forests in County Cavan. These forests are now maturing on-farm assets that have also enhanced the picturesque surroundings near Crossdoney and Belturbet. Both Ann and Paddy have no regrets about their decision to establish their farm forests. “The soil is good here and the trees have done well for us. We also believe we have established a valuable resource as well as a nice legacy for the future”.

Ann O’Reilly established a 10.6ha forest at Bellahillan, near Crossdoney, Co. Cavan in 1997. Her forest won first prize at the RDS Forestry Awards in 2010 and subsequently second prize at the 2017 awards. Ann’s forest is part her home farm, situated between the river Erne and the Doney river. Over the years her family farm enterprise had changed from dairying to cattle rearing. After she married Paddy, the farm was initially rented as it was not practical to manage a cattle enterprise from her new home, located 25km away in Belturbet.

Ann’s late father Michael Sheridan loved trees, so in 1997, she discussed the benefits of a farm forest with a local forestry consultant. He advised her to plant a mixture of species that suited their objectives and the local growing conditions. This species mix included 6ha of Oak woodland on the hilly land and 4.6ha of Norway spruce on the lower ground with larch included for further landscape enhancement. The farm is 3km from Lough Oughter, which forms a complex of lakes on the Erne water system. This area is renowned for its biodiversity supporting a wide diversity of fauna and flora. The lake system and nearby forests in Killykeen and Trinity Island makes this area a major attraction for ecotourism visitors.

Ann describes how the farm forest option in Bellahillan particularly suited the family situation. Along with Paddy, she was busy rearing their four young children; Eamon, Maire, Niall and Patricia. The financial benefits of forestry were also important “The forest premium income was very attractive and surpassed that of our previous cattle enterprise”. Ann also recalls how “excellent advice was available and the forestry contractor took care of all the ground preparation works, planted the trees, looked after weed control for four years and replaced a small number of trees a routine part of management”. The forest itself has thrived since its establishment and received a first thinning in 2015.

The thinnings from Norway spruce provided material for the manufacture of paling posts and pallets, helping to create valuable local employment. Thinning of the oak was also undertaken, with the harvested wood making excellent firewood. Ann’s mixed forest is delivering many benefits. While the oak will take longer to mature into highly valued woodland, it already provides a range of additional environmental services. The faster growing Norway spruce at Bellahillan is a complementary crop, providing periodic income from thinnings and is projected to mature around 2030, delivering on Ann’s financial objectives.

As co-ordinator of the Ranks Pig Bank for seven years, Paddy travelled all over Ireland and was frequently away from home. This meant that there was limited time for livestock farming on his 24 ha home farm at Legan, near Belturbet. The great success of Ann’s forest enterprise was one of the drivers of Paddy decision to plant 20ha of his Belturbet homestead. According to Paddy, “the land is excellent for growing trees as it has a favourable nutrient status from previous farming activity. I now have a vigorously and productive forest”. Like Ann, Paddy also established a mix of tree species including Sitka and Norway spruce along with 5ha of Oak. According to Paddy “we were very satisfied with the establishment work that was done.” It is little wonder that Paddy’s forest also achieved an RDS Awards accolade in 2012.

Paddy continues: “We also received good advice and technical support from Kevin O’Connell, our local Teagasc forestry adviser. The forestry premiums are very attractive and makes for a good cash flow.” Paddy has also put in bird boxes through his forest to help wild life and has hosted quite a few visits by local schools, walking groups and forestry students from the nearby Teagasc College in Ballyhaise.

Cathal Rudden is Chairman of the IFA Forestry Committee. He planted 20ha of Sitka spruce and Oak in 2013. Cathal believes well planned forestry “the right trees in the right place”, can be a complementary enterprise on the farm and can deliver many benefits. Cathal points out that well planned forest can enhance biodiversity on the farm and can be advantageous for farmers in terms of diversification. In this regard he says “farm forestry, even on a small area of the farm, can be endorsed as a positive farm enterprise”.

Teagasc Forestry Adviser Kevin O’Connell says “that the decision to plant should not be taken in isolation but should be part of the whole farm planning process. It should also include both parents and children due to the long term nature of the investment. Trees, and forests in particular will have a very important role in the future not only in providing environmental benefits but also in mitigating against the effects of climate change by reducing the amount of greenhouse gases in the atmosphere”.

A Valuable Forest Resource in Cavan

Forestry is an important resource that provides a range of benefits to local economies in Co. Cavan. According to Department of Agriculture, Food and the Marine statistics 462 farmers in County Cavan received a total of €2,383,273 in forest premium payments in 2017. In the same year, an estimated 71,000 cubic metres (m3) of timber was harvested. Of this, an estimated 25,000 m3 was harvested by private forest owners.

The value of timber sold by private owners in the Cavan that year is estimated to be in the region of €638,000 which feeds into the local economy. Forestry also contributes significantly to enterprise in County Cavan, with an estimated 380 employed in the forest sector. For every 100 jobs in the forestry sector an extra 90 full-time equivalent jobs are provided in other sectors of the economy such as tourism as Killykeen forest park