Film Wrapping - is it twice as good 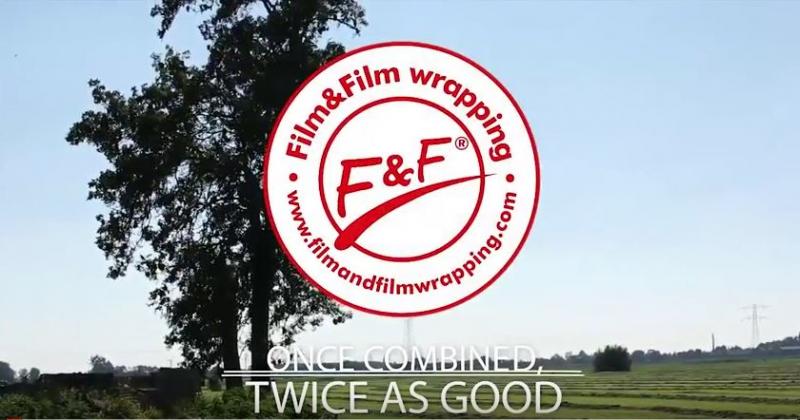 When netwrap first came on the scene, there were those who said: “It will never catch on – netwrap will never replace twine”.

As they say: “Never say never” - 30 years on, netwrap is used extensively to bind silage bales.  However, it appears that a similar baling evolution is currently underway wherein a new binding method has now begun to replace netwrap.

Over the last 5 years the use a wide polythene film to bind bales before wrapping, has grown significantly.

The manufacturers of Baletite, one such film, estimates over 1.2million bales were wrapped with Baletite in Ireland during 2016 alone.

While some have questioned whether film could replace netwrap it would appear that the Film & Film system (the combined use of a binding and a wrapping film) has the confidence of several machinery manufacturers.

At least 10 different combi-wrappers capable of applying film instead of net, have been launched over the last 5 years and a number of other manufacturers are currently working on Film & Film models.

There are now an estimated 4000+ Film & Film balewrappers worldwide from Western Europe to the Americas and Asia Pacific so the system has definitely gathered momentum.

Critics of the new Film & Film system highlight the price difference between Baletite and netwrap citing an additional cost of circa €0.62 per bale for film binding.

The price differential that existed then did not stop progress as farmers and contractors could see beyond the cost to the added value offered.

Similarly, those who have adopted Film & Film wrapping are realizing the benefits.

Aside from the time savings available when opening/feeding bales and subsequently recycling the film, many users have noticed a significant reduction in mould and wasted silage.

Excellent trial results have been obtained in Britain by Dr. Dave Davies of Silage Solutions Ltd, who acts as an independent consultant to the Silage Advisory Centres.

Dr. Davies is a well-known forage expert and is a former Senior Research Scientist at the Institute of Grassland & Environmental Research (IGER) at Aberystwyth in Wales.

On a  trial he conducted on a commercial farm in England under real working farm conditions Dr Davies demonstrated that Film & Film wrapped bales had:

The reduced losses that resulted through the use of the F&F wrapping system meant that the farmer on this farm gained more forage to feed to his herd.

For a dairy farmer, preserving forage more successfully could provide a significant financial benefit as follows:


It is important to note that the above trial was undertaken under commercial farm conditions and not on a research institution farm where bales are carefully handling and stored in perfect conditions by trained research staff.


Film & Film bales benefit from the greater protection the extra film layers provide around the bale circumference enabling them to better withstand the rigours of the handling and storage processes.


Had this been a netwrap bale this sizeable hole would have allowed significant air ingress before it was discovered.


Baletite creates a denser, more compact bale due to the stiffer nature of this netwrap replacement film.  Whereas netwrap will continue to elongate post baling (because of its netting structure) the stiffer configuration of Baletite maintains the pressure that has been applied to the bale within the baling chamber.


Trials undertaken by ILVO (Instituut voor Landbouw – en Visserijonderzoek / Institute for Research in Agriculture and Fisheries) in Belgium have found that Film & Film System bales were on average 2cm smaller in circumference than traditionally netwrapped bales in addition to being 10% denser.


Film & Film wrapping can also enable the automation of the feeding process.

If using a bale handler and mixer wagon, it is possible to feed out Film & Film bales with minimum human intervention.


Once opened whether by hand or by bale handler, Baletite peels cleanly from the bale as no fodder can become enmeshed in it as with netwrap.


Film & Film wrapping provides further benefits in terms of recycling and labour efficiencies as it eliminates the need to spend time separating and segregating netwrap from film for recycling after use.

Polythene films are also easier to recycle in terms of processability and cleanliness.


As netwrap was a step-change in wrapping practices 30 years ago, binding films like Baletite are paving the way to a new era of added value and cost benefits.